A beginners guide to fantasy board gaming – some FAQs 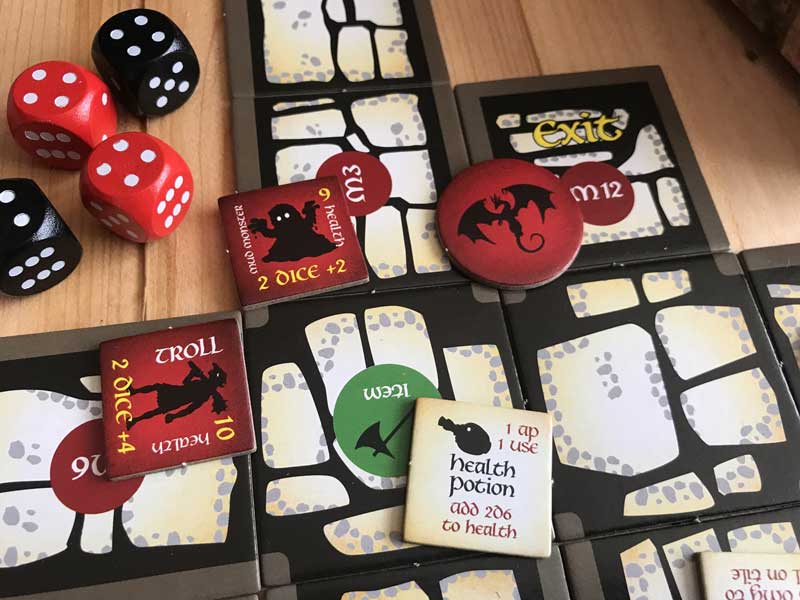 Ever feel you need more than this?

What if there was a world where things worked differently? Where the old ways were still alive and people used their intense imagination and even inventiveness to have fun? A world of hand-drawn, homemade battle maps, new rulebook editions, dwarfs, dungeons and dragons. Before entertainment was addictive and digital, and people wanted to escape the confines of this reality, they used a common language.

When we tell people we design and make simple (or gateway) fantasy board games, we often get asked, “what’s a fantasy board game when it’s at home?” So we thought, wait! Let’s get back to basics and answer a few questions for people who are beginning fantasy board games. If you don’t know your Temporal Wormhole from your Draemora Champion, or your Vorpal Blade from your Abyssal Chicken, then stick around.

What does RPG mean?

Providing a solid 21st century definition is murkier than wandering around Riften city at night. RPGs, or “Role-Playing games” explore the science of player choice. And consequence. These are games set in an open world, that explore the science of player choice. also known as ‘your decisions matter’. They come in both digital and tabletop RPG forms.

These games allow you to make your own choices about where you go, how you progress through the narrative, where you live, what ‘role’ you play and how you play it.

Instead of fixed characters, you pick roles like a cutthroat, ‘nothing personal’ rogue, a reality-bending wizard or an out-and-out warrior. But an RPG will never tell what your character does, or sometimes whether you work with your party, or turn against your friends.

Are there fantasy board games?

Yes, loads! Imagine owning your own travel fantasy. Your own Bag of Dungeon. An exciting roleplaying adventure squeezed into a smaller board game experience, they’re often the best for travel gaming as they are small and portable.

They can be powerfully deep and complex such as an epic like Gloomhaven. Or they can be simple games for players who are new to the fantasy gaming genre. There are Roguelike board games, dungeon-crawling board games and board games that let you turn on your friends. The modern board can provide you with Holiday D&D for beginners, some are as simple as a Dungeon in a Bag. Unplug the family and turn them into something useful!

High fantasy describes a world separate from our own, so much so that the trees are different; even the grass is alien. Low fantasy is set on our planet, except with fantasy elements or things. This isn’t a clear-cut distinction, more a spectrum. A tool to define our experience of fantasy gaming. Both can contain swords, gnomes and old tomes but both have their own atmosphere. An important distinction for the savvy gamer.

What is a dungeon crawler?

“You look down at the young adventurer gripping his huge iron shield and clanking armour. He looks scared. He should be. You’re going down into an underground labyrinth lit, only by torchlight, known to be filled with things unmentionable. Still, this ain’t your first dungeon. You’ll get him home safe. Because they’re your party. Because this isn’t a drill adventurer, it’s a dungeon crawl.”

AKA the hack-n-slash. Dungeon crawlers are a game whereby the story takes you into dangerous enemy territory (most commonly those dark underground holes where evil calls home, the ‘dungeon’). To survive, you must manage your resources and your team, as you go through confusing mazes, traps and monsters to beat the dungeon, discover its secrets and find the loot.

Prepare to be introduced to one of gaming’s purest and most delicious feedback loops. Get cool new items, to beat scarier monsters to get cool new items, to beat EVEN SCARIER monsters. I entered the dungeon in my early teens, and to be honest, I don’t know if I can find my way out. But, to be honest, I don’t think I want to. Simple, satisfying and endlessly replayable.

You’ll need to work as a team and keep all your factory standard peripherals (that’s arms and legs).

What is a Roguelike game?

This old-school format has resurfaced as one of the latest trends in gaming. Roguelike/rogue-like is a genre of gameplay. The hellish game gremlins within these multiplayer dungeon crawlers randomly spawn random recipes of enemies and obstacles that want to ruin your day. It’s named after an old game from the 1980s called ‘Rogue’ (1980), which was made for a wildly unpopular computer system called Unix. It was a game created out of symbols found on the keyboard; a system called ASCII.

The aim is to simply make it through as many of these encounters as you can, levelling up your character and getting new items/spells/weapons but also unlocking new enemies. You make your way to the last boss room/way out of the dungeon which is often tantalisingly from the very beginning. But the dungeon changes its configurations, and everything wants to kill you. How hard can it be?

This means prepare to die. A lot. But that’s all part of the fun.

These attempts are called ‘runs’, they can begin and end quickly as Rogue-likes are designed to be incredibly easy to set up. Each run is different. Each one has its own drama. You become skilled and both you and the dungeon level up. There are even Rogue-like board games!

“Roguelike really isn’t about randomized dungeons but about having all your progress reset by death. […] Like FTL, Don’t Starve, 100 Rogues, etc. are about seeing how far you can get before the game ultimately beats you.”

Who invented the first fantasy board games?

During the late 1960s and early 1970s, fascination with fantasy and fantasy games were considered niche. This changed in 1974, very quickly. An out of work insurance officer, and a history student, made something in the cold alpine winters of lake town Minnesota that would create an avalanche. A powerful spell would pass over North America, then the world. This would spell the beginning of D&D.

In the early 1970’s Gary Gygax and Dave Armeson tied together all the finishing pieces that would become D&D.

It was a system of rules. That’s it. No pieces, no board, no remotes or maps or anything. This would be a system that would allow people to play out their own characters, that they would ‘roleplay’ – yes this is where ‘Role Playing Game/RPG’ comes from – and to create their own fantasy lives. These rules and fantasy visuals continue in a lineage of titles such as World of Warcraft, Skyrim and even Game of Thrones!

Is there an easy way, or introduction, to fantasy gaming?

There are games designed to not pre-assume any knowledge from new or beginner players. These are called ‘gateway games’. Not everyone is an expert, and these games are easy to take part in and to understand. Good for starting off your board game collection.

So there you have it. Treat this as your old tattered map and me, just the old creepy man that gave it to you. Take this powerful knowledge and use it to your advantage. 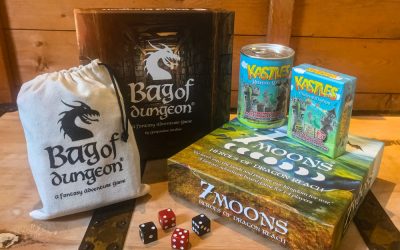 What are the best gifts for boys and girls this Christmas? Is board gaming still a contender for the screen generation?

No screen required! Do you have a monosyllabic teenager staring into your fridge? Do you find it hard to get the kids to join in for some family time? Are the new generation of family board games a good bridge back to the kitchen table? As you all know Santa is... 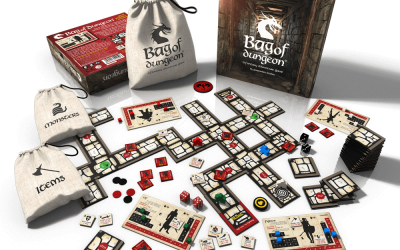 Looking for a family alternative to Dungeons and Dragons-style board games? Bag of Dungeon might just get you rolling…

"Your torch casts its oily yellow light on the dank walls of the tunnel. Ahead in the darkness, distant heavy footsteps sound like they're heading your way. A door stands ajar on your left, and a vile odour emanates from inside. What would you like to do?  When the... 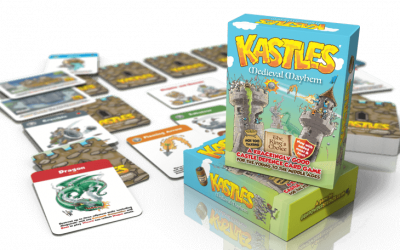 Our games are tested on children

Designing a card game can be in-tents! Gunpowder Studios began on a summer camping holiday, with a standard deck of playing cards, a load of kids (ours and others from nearby tents) and an idea for a quick and boisterous castle siege game. The object of the exercise...