It’s funny what you do on holiday, you know like designing games and stuff!

So back in 2012 or was it 2013?, for copyright reasons let’s say 2012, we where on a family camping holiday and I decided to try to devise a way of keeping the kids entertained or interested with something non-screen based, as you do! My son loved castles and soldiers at that time (around 8 or 9) and we have always enjoyed playing card games, board games and everything from traditional family games to fantasy and role-playing games, especially independent ones, so, therefore, we set about creating Kastles the card game. Here’s how we did it.

We started with a simple idea, ‘defend your castle and destroy your enemies’ and sketched out some rules along with allocating some cards to different elements of the game.

Once the word spread on one campsite we had kids waking us up at 6.30am to play Kastles!

Keeping it simple we managed to get a working prototype up and running in a day or two. After a while, we had a working set of rules and played it over and over again, testing and re-testing but always bringing it back in line with the initial idea so as to keep the gameplay fun and simple. I quickly jotted down the mechanics of the game so as not to forget them and Kastles was born. Well, version 1 (beta) anyway!

Printing and producing the playing cards

Over the next few months, we designed and produced the cards and packaging for printing, I asked a friend who works in the board game industry to help draw them up and although I am an illustrator myself i wanted them to look a certain way.

Quality control and printing your game

Once the first version was ready to go we found locating a decent printing company was a bit of a fiddle but we found a great one based online who gave us a decent price for 100 starter packs. Once they arrived we started selling the games and put a small profit away for the next batch, its quite expensive to get a pack of good quality playing cards printed whilst keeping the costs down and the standard up, if you print a lot you can reduce your costs. Anyway, we sold out of the first 100 packs, got some nice feedback, re-jigged the cards, re-wrote the rules to make things even easier to play and printed our second batch. We are happy with the 2nd edition and feel it’s been a fun project so far.

We eventually went with a Cambridge based card printing company called Ivory Graphics who were really helpful, super friendly and very professional. They guided us through the process and even highlighted a few errors which we quickly corrected. It’s important you can talk to your printers on the phone so China, whom may seem cheaper to start with, did not work for us, if you have a problem you need to be able to talk to someone and Ivory worked out pretty much the same price per pack. 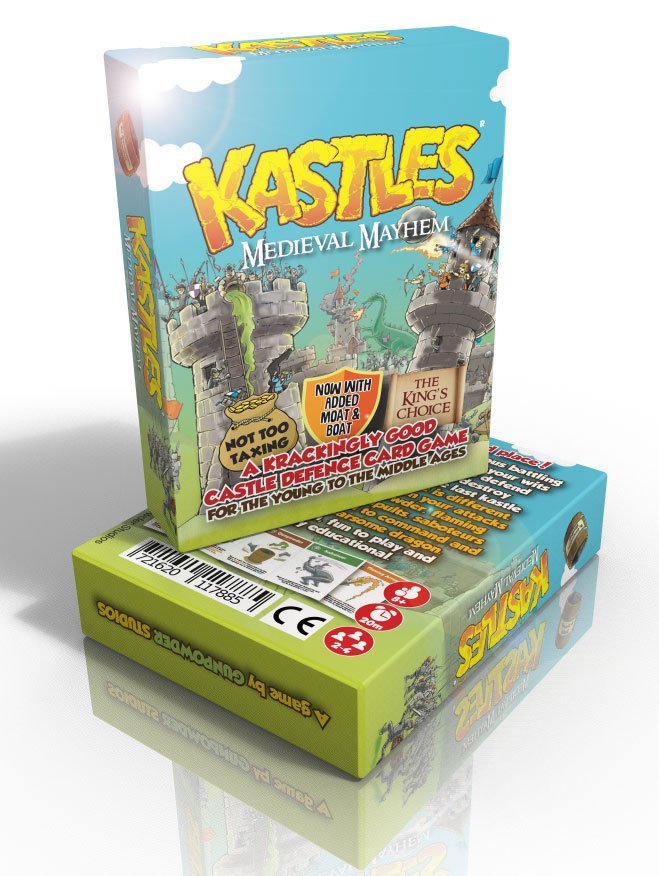 We had lots of requests for extra rules but needed to keep the game true to its original idea so added a page on the website with some fun additional rules. We are now planning some expansion packs and hopefully, the game will grow in the right direction. If you have an idea these days it’s not hard to get it out there. Here’s a list of things we have learnt from creating our game.

Finally a few thank yous. Original game design by Tim Sharville plus a big thanks to all the fantastic kids and friends who helped with the playtesting of Kastles (Burgers are on me if we make it big;). We played it again and again and again and ran it through its paces. I have many wrecked packs to prove it.